The discovery that infantile hemangiomas can be excellently treated with the non-selective beta blocker propranolol was a chance finding and is only a few years old. Christine Labrèze et al. from Bordeaux had observed in two children with complicated infantile hemangiomas in the head and neck area that treatment with propranolol, which was started in connection with impending heart failure, resulted in visible and palpable changes to the hemangioma within one to two days and finally in its early regression. This finding and the consequences derived from it are regarded as the start of a revolution in the treatment of infantile hemangiomas and also as a stimulus to search for drug therapy options for vascular anomalies in general.

Very soon after the efficacy of propranolol was first described, there was great willingness on the part of the medical profession and the parents of affected children to adopt oral propranolol therapy for off-label use without regulatory approval from drug authorities at that time. It is noteworthy that under these circumstances it was still possible to conduct a large international randomized controlled trial comparing propranolol vs. placebo (and other studies). With the aid of this research the effect of this form of treatment could be proven beyond doubt. Orally administered propranolol leads to a successful regression of infantile hemangioma in 95% (confidence interval 88-99%) of the treated patients. Complete or near-complete regression was documented in 60% of the patients (3.6% on placebo).

Since 2014, propranolol has been approved in both the USA and Europe for the systemic treatment of infantile hemangiomas and is distributed as a ready-to-use solution (3.75 mg/ml). The specific dose recommendations are made by the attending physician. Usually the target dose of 2-3 mg/kg/d is gradually increased. Depending on the age of the child and other factors, therapy is started under inpatient, day-care or outpatient conditions. The therapy should be started as early as possible, taking into account the typical growth dynamics, but usually not before a (corrected) age of 8 weeks. If the therapy is ended too early, i.e., before the onset of regression, the infantile hemangioma may grow again (rebound effect).

This can usually be avoided if the therapy is continued until the first year of life.

The occurrence of the very rare serious side effects, such as hypoglycemia, bronchospasm and worsening of existing asthma, ECG changes in the sense of bradycardiac arrhythmias as well as a drop in blood pressure, are well known to the attending physician and can be avoided as far as possible by observing simple rules. Diarrhea as well as sleep disturbances and restlessness occur occasionally and may warrant a dose reduction. If the instructions for use and contraindications are observed, the therapy is well tolerated and safe. Treatment is only exceptionally discontinued as a result of side effects.

Presumably other substances from the group of beta blockers are similarly effective as propranolol. Some practitioners expect the use of selective beta blockers such as atenolol to reduce the undesirable effects and accept the lack of approval for this therapy.

The mode of action of beta blockers on infantile hemangiomas has not yet been conclusively clarified. The rapid effect of a change in color and consistency of the hemangioma is attributed to a reduction in blood flow resulting from vasoconstriction. The increased vascular growth (angiogenesis or vasculogenesis) is suppressed by reduction/inhibition of growth factors (VEGF, bFGF). The long-term effect of infantile hemangioma regression is attributed to an acceleration of programmed cell death (apoptosis) of endothelial cells. It has been shown that several of these mechanisms are mediated by the oxygen-dependent growth factor HIF1α.

Beta blockers also reduce the size and color intensity of superficial infantile hemangiomas when they are applied locally as gel preparations or solutions on the skin. In this situation they can be considered as an alternative to laser therapy. Most experience is available for the topical application of timolol 0.5%. Superficial infantile hemangiomas show a good response to topical therapy. A comparison of the efficacy of topical vs. systemic beta blocker therapy has not yet been performed. Thus there is no approval from the German or European drug authorities for topical therapy. Despite the good tolerability documented so far, there is a lack of studies on systemic drug uptake and possibly associated side effects. 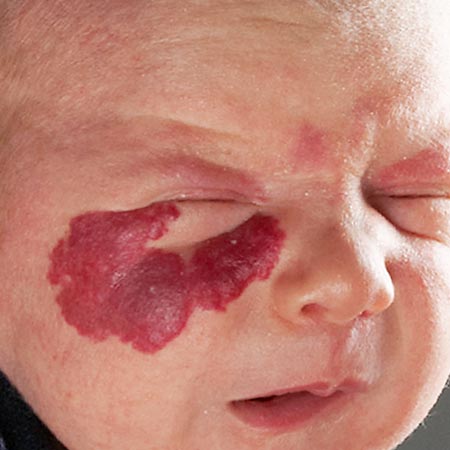 Infant with infantile hemangioma on the right cheek, rebound each time after discontinuation of propranolol; medical therapy