At birth, a soft, cushion-like swelling was visible more distally and laterally accentuated on the left leg. No accompanying skin discoloration, no hyperthermia or increased pulsation. The photograph shows the child at the end of the first year of life. 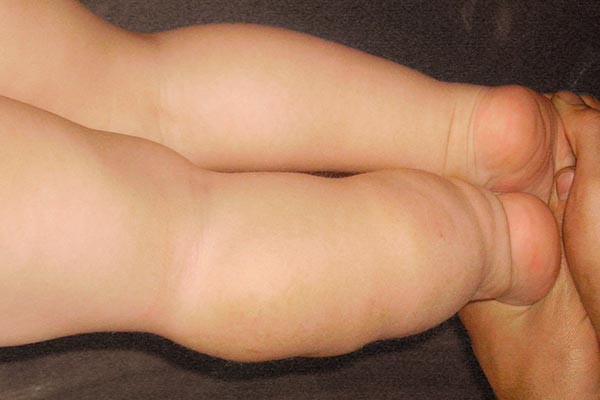 The following photographs were taken at the end of the second year of life. The rather laterodorsal extension of the lesion on the left lower leg is clearly visible. Minimal accompanying yellowish-brownish skin discoloration. 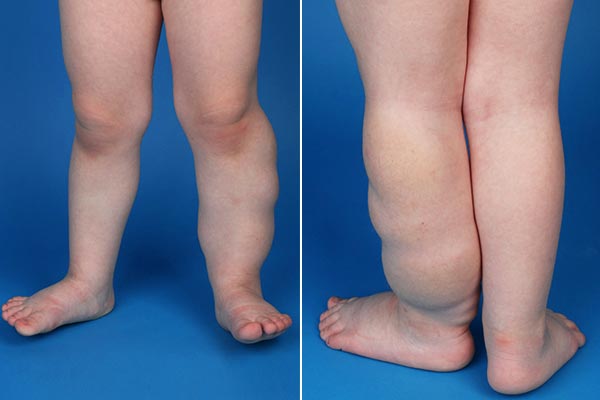 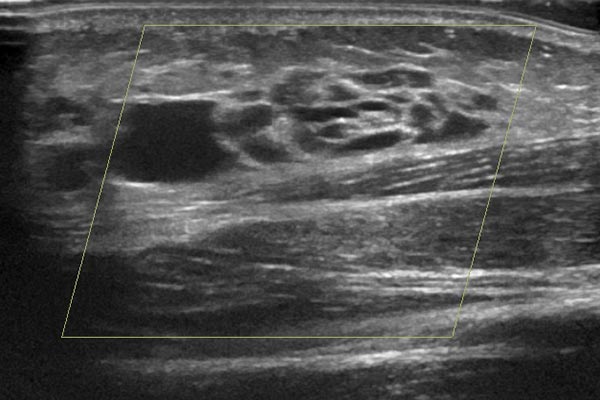 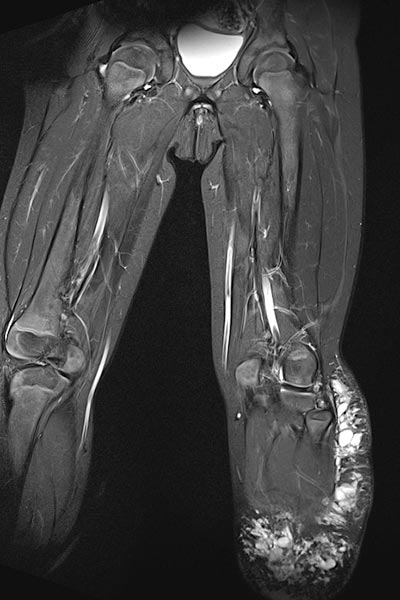 In magnetic resonance imaging (T1-weighted, fat-saturated), after contrast medium administration, the lesion on the left leg shows no contrast medium enhancement in the subcutaneous fat tissue. The cyst walls show subtle accumulation of contrast medium (detail enlargement on the right). Thus, the typical MRI image of a lymphatic malformation. 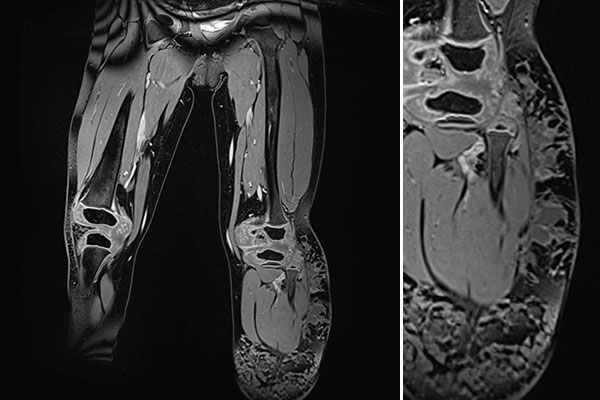 Sclerotherapy with doxycycline (concentration 10 mg/ml) of the cystic portions was performed because of the marked progression and the repeatedly inflamed, painful portions. The fluoroscopic image shows the puncture and contrast filling of the cysts before injection of the sclerosing agent. 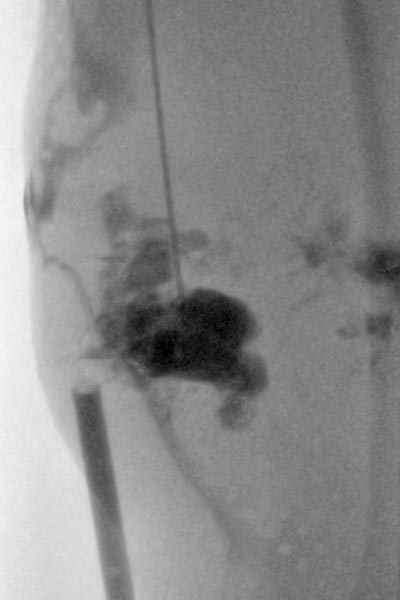 Photograph 2 years later, the child is now 4 years old. Relative to the growth of the body, the lesion has become slightly smaller. However, there is still recurrent local inflammation, which is painful. The accompanying area with slightly yellowish skin discoloration is more or less unchanged. 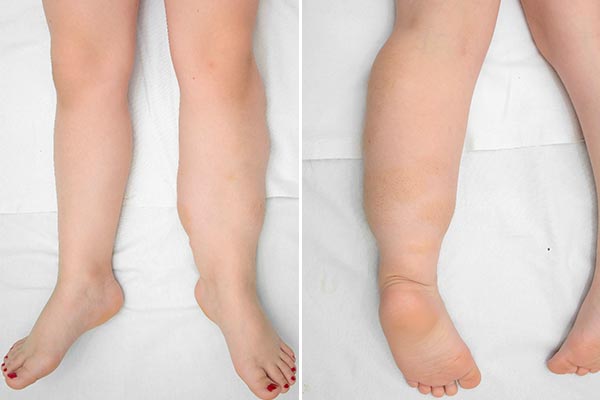 Subsequently, recurrent erysipelas occurred time and again. Here, the course of an episode of erysipelas on the dorsal, proximal part of the left lower left is shown as a series of photographs. Initially on day 1 (left) local pain and reddish, pale discoloration. On day 3 (middle) marked increase in the redness, now local hyperthermia is also palpable. On day 5 (right) the redness is still increasing somewhat, but the area involved is decreasing and the swelling and pain have already improved slightly on penicillin therapy.

As the clinical result was still not satisfactory, a sclerotherapy session was again performed (the fluoroscopic image after contrast injection into the lesion is shown here). In view of the size of the lesion, it was likely from the outset that this would have to be repeated. This time, an ultrasound-guided biopsy was performed in the same session for histopathological subdifferentiation of the slow-flow vascular malformation. 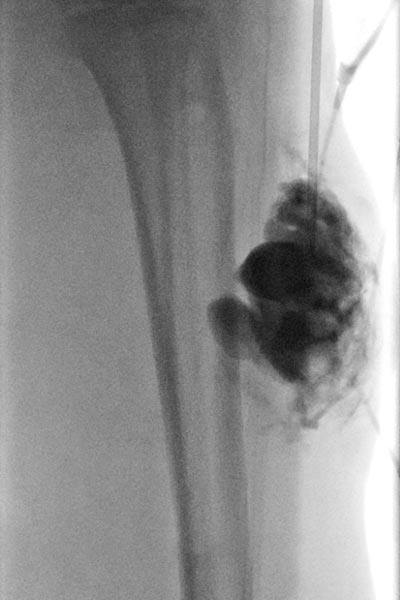 The biopsy was performed in the same session under ultrasound guidance using a disposable biopsy gun. The biopsy needle is "shot" approx. 2 cm into the tissue with a spring system, and a small tissue cylinder a few millimeters thick and just under 2 cm long is obtained via a small indentation in the needle. If the target site of this very small tissue sample has been well chosen, a histopathological assessment is possible. 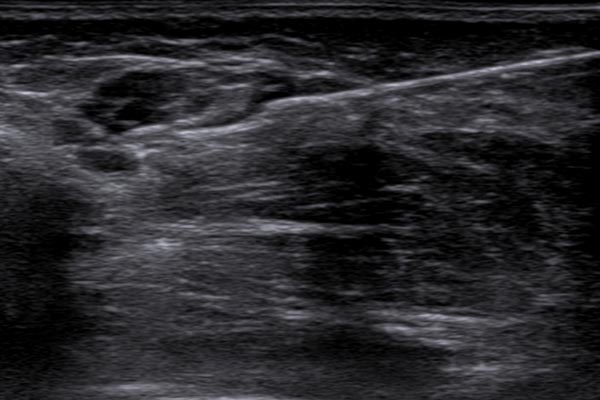 Histopathological section of the biopsy specimen; hematoxylin & eosin stain, overview magnification, 20x; the irregular wall structure of the dysplastic vascular spaces, typical of a vascular malformation, is clearly visible. The actual dysplastic vascular space is larger than the extracted piece of tissue. Therefore, the vessel wall does not appear as tubular, but the vessel is shown as if "everted" and the wall is shown forming the outer border without an actual visible tubular vessel. The fatty tissue shown is nonspecific. 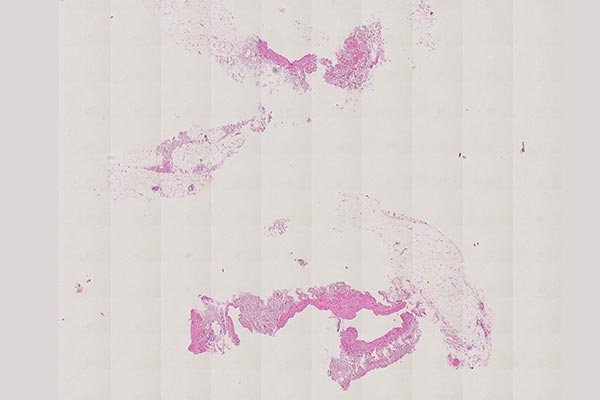 Hematoxylin & eosin stain, 40x magnification as overview; another vessel section is shown here. The irregular and partly missing wall structure of the dysplastic vascular spaces throughout the lesion is again typical of a vascular malformation. 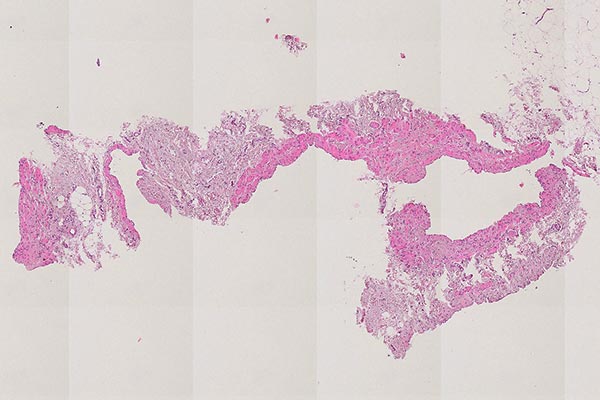 Hematoxylin & eosin stain, 100x magnification; just visible in this magnification is the endothelial cell layer forming the inner lining of a larger, dysplastic vascular space. Thus, in this small section of the specimen, the vascular endothelial cells that actually form the inner wall of the vessel appear as "external", since the whole vascular area is not depicted. The course and the thickness as well as the distribution of the underlying, dark pink-colored, smooth muscular vessel wall is very irregular (malformation). 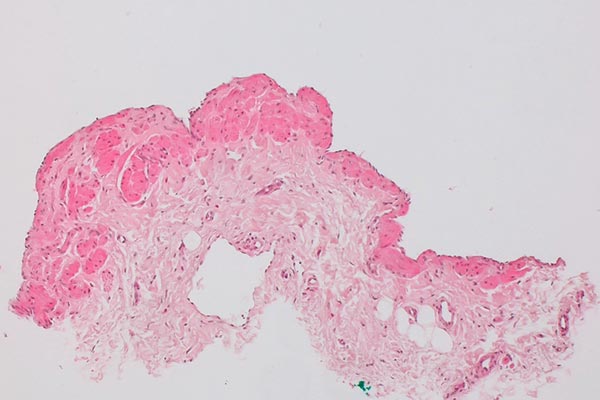 Immunohistological CD31 staining, vascular endothelial cells stain specifically with it, left image 40x overview, right image 200x detail magnification. The dysplastic spaces are lined by CD31-positive endothelia, this marker thus confirming the vascular nature of the lesion. The origin of the brown staining with the CD31 antibody is membranous at the endothelial cells (appearance similar to cytoplasmic staining), as can be seen in the detail magnification (right image).

Immunohistochemical staining for podoplanin with D2-40 antibodies, 110× magnification. The endothelium of the large dysplastic vascular space is not D2-40-positive (venous malformation, lower right detail). Individual smaller dysplastic vascular spaces, on the other hand (detail top right), are D2-40-positive (lymphatic malformation). Individual physiological lymphatic vessels are often located within a lesion, but the number is normally not as increased as in this case. Histology therefore indicates the presence of a combined venolymphatic malformation.

D2-40 antibody staining, 200× magnification. In the section of the lesion shown here, the endothelium of the large dysplastic vascular space is clearly not D2-40-positive and thus represents not a lymphatic but a venous malformation component. The few small vascular spaces with D2-40-positive endothelial cells shown here should not be considered pathological based on size and number alone, but instead regarded as physiological lymphatic vessels. 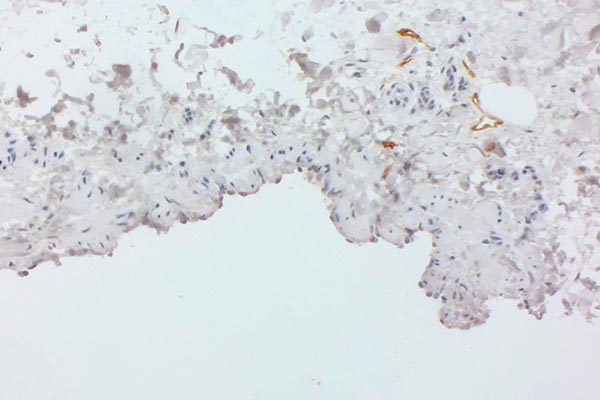 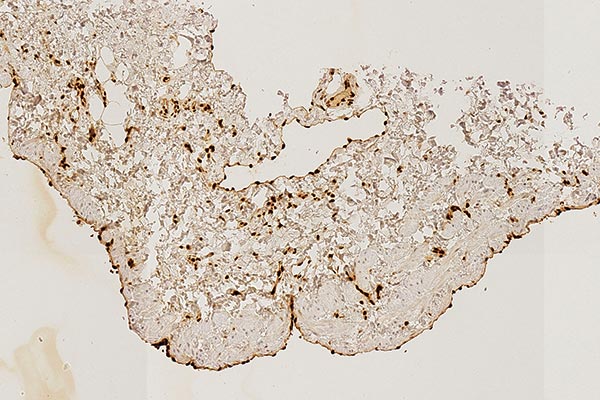 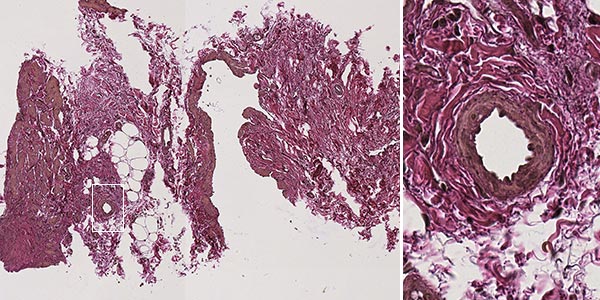 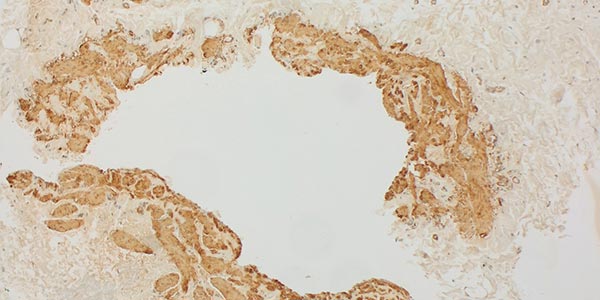 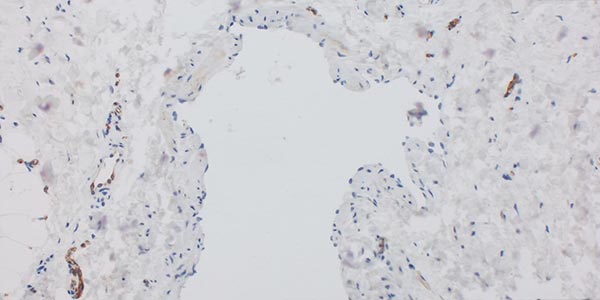 To determine the cell proliferation of a cell population, the Ki67 protein indicating proliferating cells is stained with the MIB-1 antibody; 250x magnification. There is no evidence of increased proliferation at the cellular level in either the underlying dysplastic vessel wall or the associated vascular endothelia. Thus there is a benign, non-proliferating lesion here. 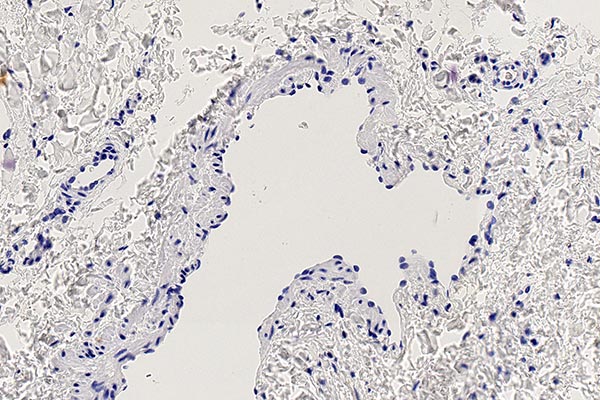 A slightly yellowish discolored, soft swelling on the left lower leg and knee was visible at birth, lymphedema in the foot did not exist at that time. Since the lesion progressed rapidly and there was recurrent erysipelas, a decision was made to carry out early treatment with sclerotherapy. The clinical findings and imaging were clearly suggestive of a lymphatic malformation. In this case, histopathological confirmation of the diagnosis by a small 16-gauge punch biopsy was performed to confirm the diagnosis.

Histopathological workup revealed the typical findings of a benign vascular lesion (CD31) with dysplastic, asymmetrically irregular wall structure. As is typical of such slow-flow vascular malformations, the smooth muscle cell vessel wall is not equally thick and symmetrically formed in different parts of the lesion and there seems to be a complete absence of vessel wall in places (SMA, EvG). There is hardly any proliferation of the involved tissue (Ki67 very low). Lack of WT1 positivity of the involved vascular endothelia is another indication of a vascular malformation. The most important histopathological distinction between a lymphatic and a venous malformation is the immunohistochemical staining of the podoplanin of the vascular endothelia of the lesion by means of the antibody D2-40. In this case only the vascular endothelial cells of a lymphatic malformation (D2-40 positive) will stain. The specimen also showed multiple areas of dysplastic vascular malformation whose vascular endothelium did not stain with D2-40, which means these are parts of a venous malformation. Therefore, the correct histopathological diagnosis is a combined venolymphatic malformation. The lymphatic component, clearly in the foreground clinically and on imaging, is rather in the background compared to the venous component in the punch biopsy specimen obtained from the lesion.