The low peripheral vascular resistance caused by the AV shunts in AVM is initially compensated for by increased ejection fraction of the left ventricle and increased heart rate. However, if the peripheral oxygen demand of organs and especially of the heart muscle can no longer be met by this increase in cardiac output, so-called high-output cardiac failure with pumping failure of the heart may occur. As arteriovenous malformations (AVM) usually increase in size slowly and continuously during the course of the disease, cardiac output slowly increases. This danger exists in principle with all large arteriovenous malformations.

This situation with increased cardiac preload and decreased peripheral vascular resistance leads to a constant increase in cardiac output in the form of a classic progressive, stepwise evolution in stages.

In the second stage, in addition to the high CI, there is also increased left ventricular filling pressure. In the laboratory, this is measurable by an elevated NT-proBNP.

In the third and final stage, pulmonary arterial hypertension (systolic > 40 mmHg) is added to the elevated LV filling pressure due to the constant high blood flow and volume in the pulmonary circulation. In the most severe form of pulmonary arterial hypertension (PAH), cardiac output decreases again, resulting in a very poor prognosis. Left ventricular heart failure additionally worsens PAH.

Typical symptoms occur mostly at the age of > 50 to 60 years and are (exertional) dyspnea, early fatigue, palpitations, reduced resilience. In the body, edema occurs mainly in the legs and abdomen (ascites).

Two additional factors complicate this situation in some cases:

Patients with high-output cardiac failure exhibit chronic activation of the sympathetic nervous and renin-angiotensin-aldosterone systems, with increased release of vasopressin. The antidiuretic effect of this hormone, in turn, causes chronic volume load with ventricular hypertrophy through to cardiac failure.

In this situation, the shunts of the arteriovenous malformation must be urgently occluded at least partially. 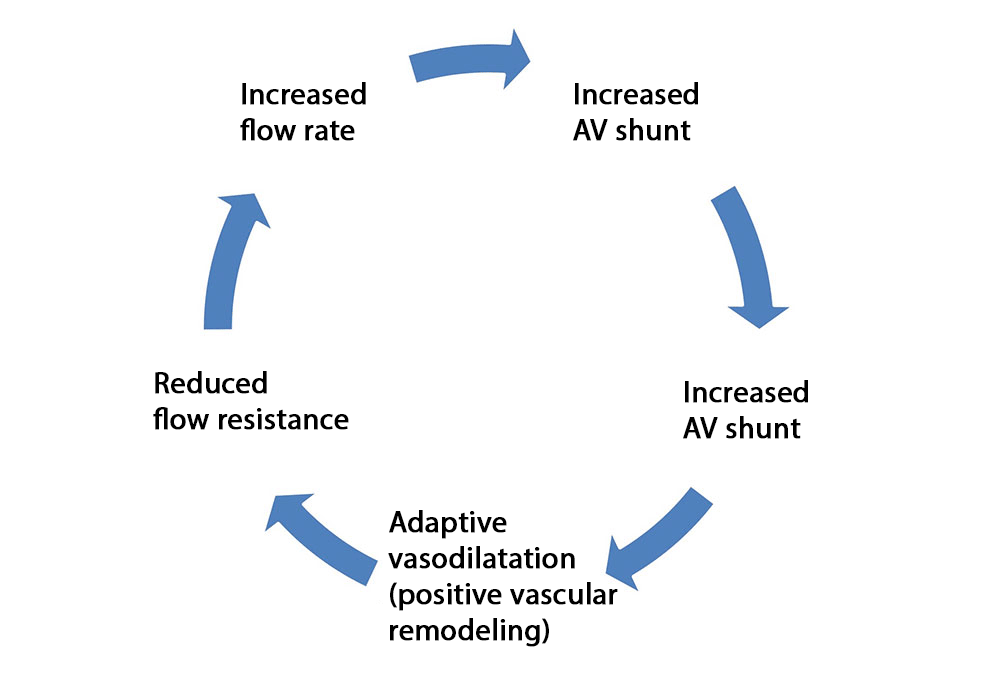