Starting from the 2nd week of life, the infant developed a total of 8 small typical, slow-growing cutaneous infantile hemangiomas. In addition, there was a circumscribed swelling ventrally in the middle of the left upper arm that was slowly increasing in size. The overlying skin was not discolored. The B-scan  ultrasound shown here, at the end of the 4th month of life, reveals a relatively hypoechoic tumor in the subcutaneous tissue. 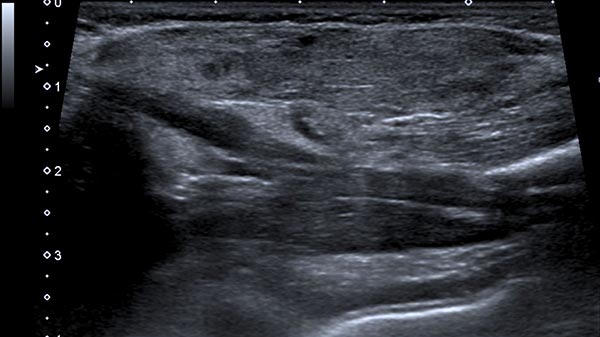 Power Doppler imaging shows strong perfusion of the mass, so that a vascular tumor is assumed. The strong blood flow is shown here in orange in the B-scan, while the direction of flow is not color-coded. 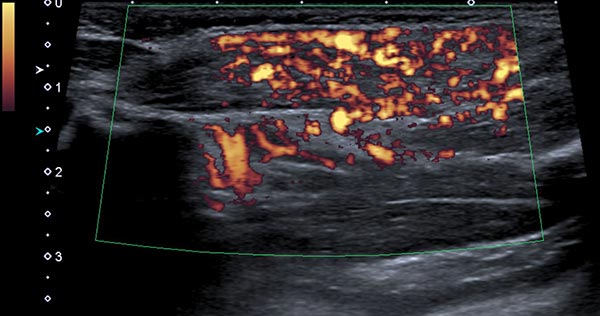 In ultrasound elastography, the mechanical stiffness of the tumor can be color-coded (left image), with the corresponding B-scan on the right. In color coding, hard tissue is shown in blue, medium-hard tissue in green and soft tissue in red. The tumor itself is medium-hard to slightly softer (green) than the surrounding tissue (blue). 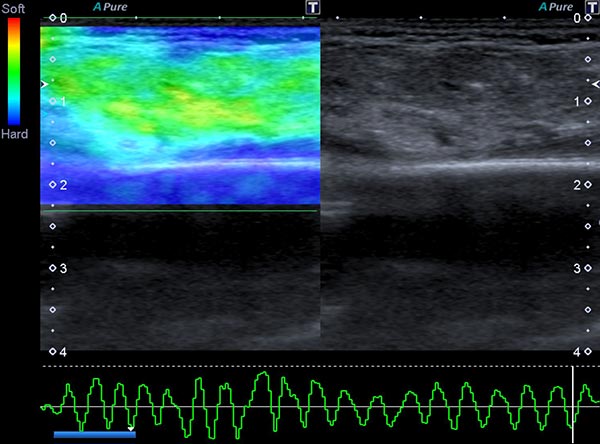 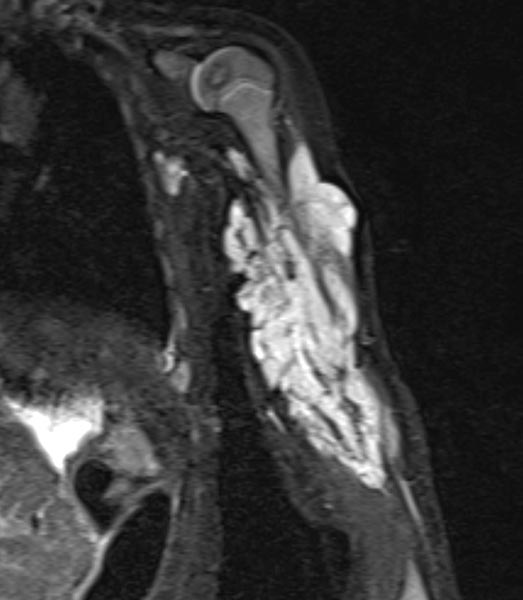 At the end of the 8th month of life, the visible infantile hemangiomas on the skin have reached their maximum extent. The largest hemangioma is located on the right shoulder over the deltoid muscle (left image). Also clearly visible is the swelling on the left upper arm (right image), which is much more voluminous in comparison. On the assumption that the lesion in the left arm is probably also an infantile hemangioma, oral propranolol is now initiated.

Power Doppler imaging at the end of the 8th month of life shows not only an increase in volume of the subcutaneous tumor, but also a further marked increase in perfusion (color-coded in orange). 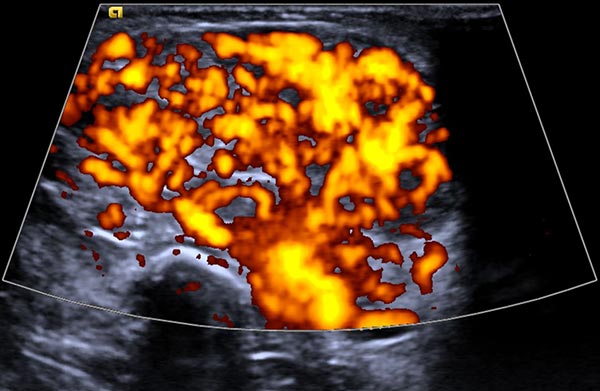 The corresponding B-scan ultrasound at the end of the 8th month of life shows not only the increase in volume but also markedly increased hypoechoic parts of the tumor. This corresponds to areas of cell proliferation and is a characteristic of an infantile hemangioma in the proliferation phase, but may also occur in other vascular tumors. 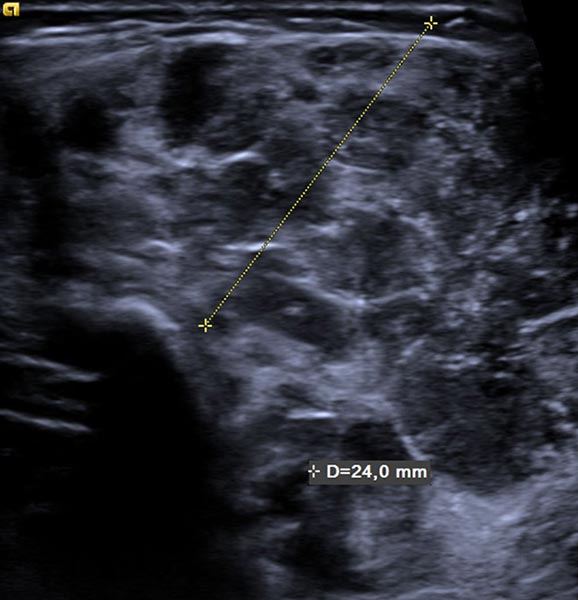 The child is 24 months old in this photograph. After 12 months of propranolol therapy, which led to initial improvement, it had to be discontinued 4 months before this photograph because of multiple comorbidities. The visible cutaneous infantile hemangiomas were reduced in size under propranolol. However, the swelling on the left upper arm increased again considerably after discontinuation of propranolol, so that further evaluation was required. 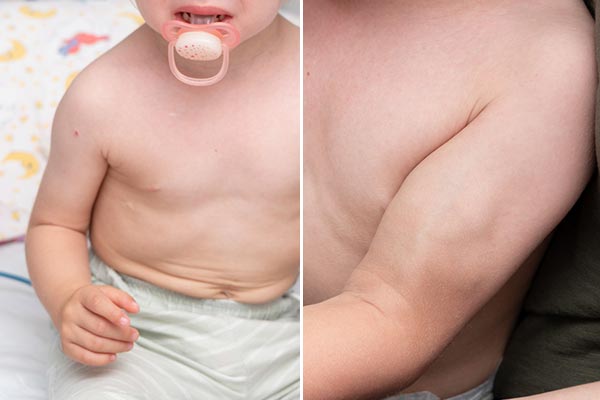 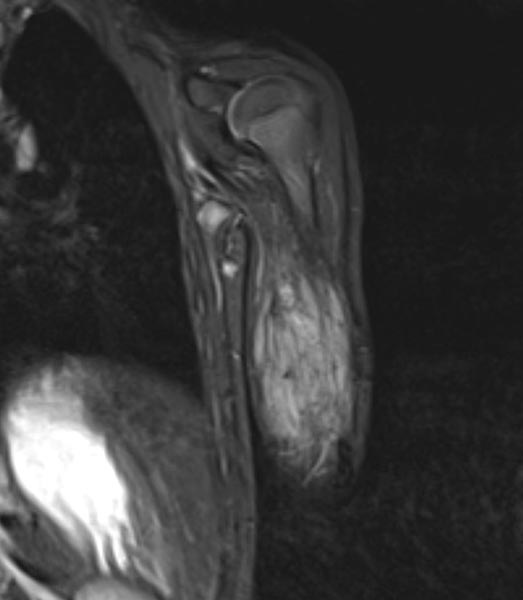 Comparison of coronal T1-weighted MRI sequences from February 2019 (left) with September 2021 (right). In these T1-weighted images, fat is shown as hyperintense (white). In the right image, it is easy to see that the amount of fat in the tumor has increased over time. This is typical of an infantile hemangioma that is partially in involution. 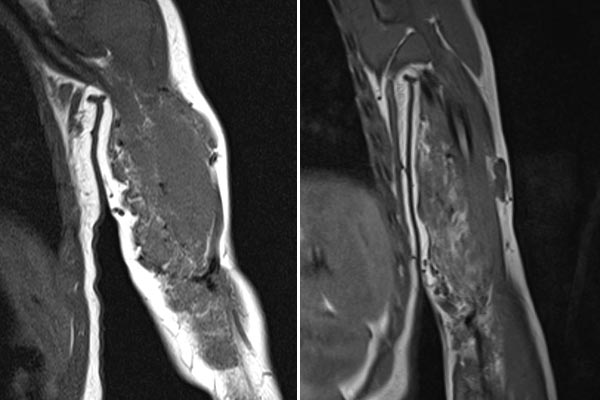 Histopathological evaluation by punch biopsy was performed in order to clearly confirm the diagnosis despite the evidence of infantile hemangioma, in view of the differential behavior of the cutaneous (almost regressed) and subcutaneous portions (re-enlargement). The ultrasound image shows the biopsy needle inside the tumor on the upper arm. 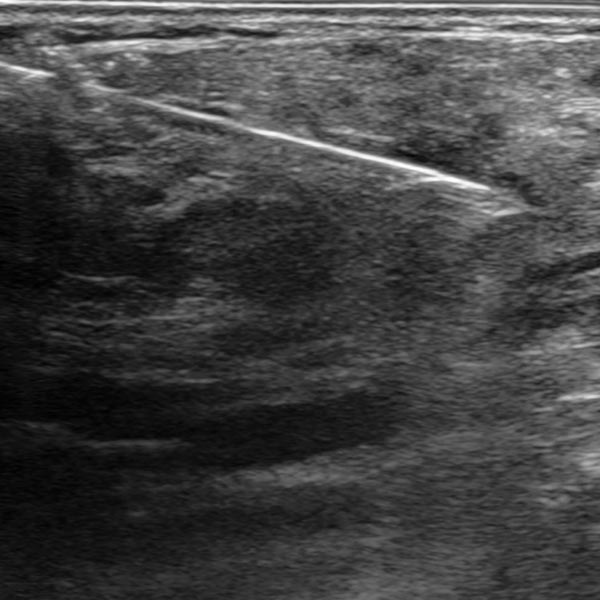 At 90× magnification (H&E stain), lobulation of the vascular proliferates is suggestive of a benign vascular process. The enclosed skeletal muscle fibers are overgrown but not destroyed, as would be the case in a malignant process. Intermingling with pre-existing tissue structures without their alteration is typical of infantile hemangiomas. 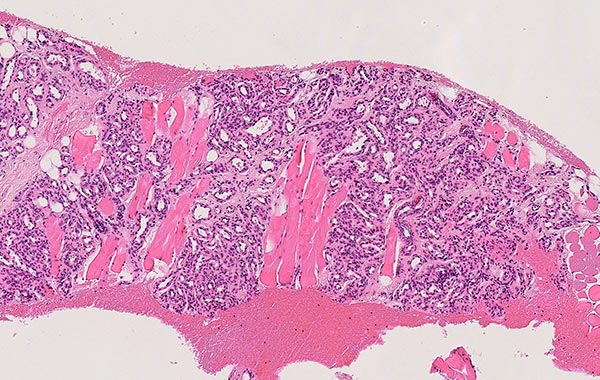 In the 270x detail magnification (H&E staining), in the incipient involution phase present here, the lumina of the capillaries within the lobular vascular proliferates are not slit-like and very densely crowded (which would be typical of the proliferation phase), but rather more dilated and showing real lumina. The capillaries move apart in favor of progressive interstitial fibrosis and are surrounded by stroma. In addition, a widening of the basement membrane occurs. 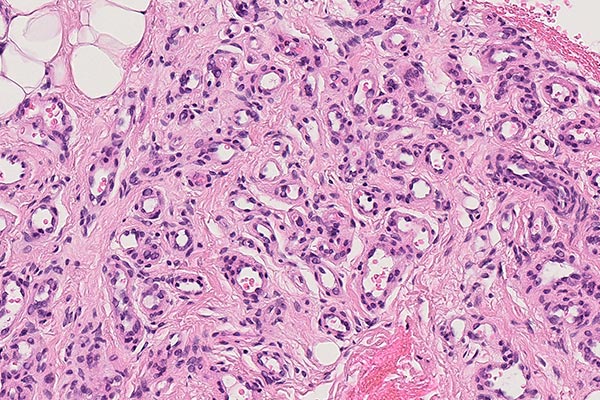 130x magnification (CD31 immunohistochemical staining to visualize vascular endothelial cells) shows intense brown staining of the endothelial structures. This proves the vascular character of the lesion. The vessels are typically arranged lobulated in infantile hemangioma as a vascular tumor. 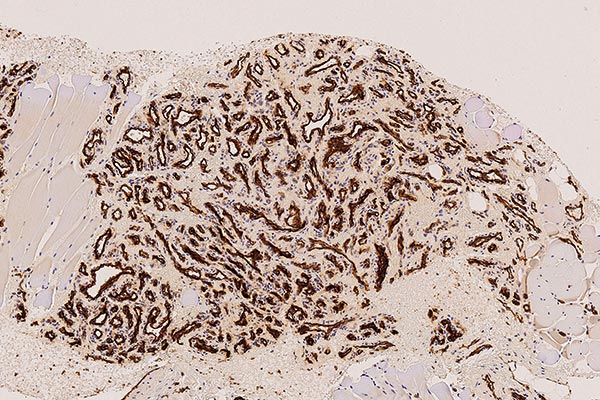 Under 100x magnification (SMA "smooth muscle actin" to visualize the smooth muscle perimyocyte layer), the symmetrical perimyocyte distribution around each depicted capillary is made clear. This is a criterion of a benign vascular process. 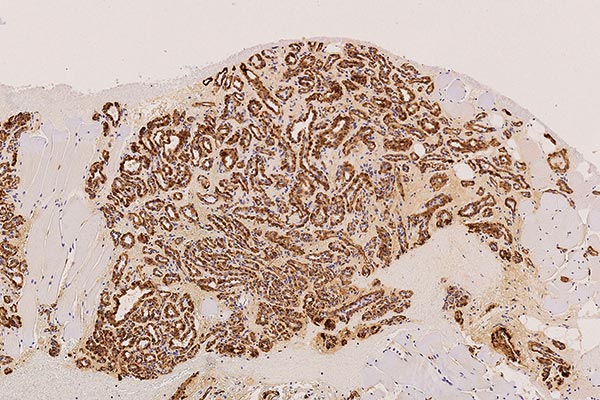 At 130× magnification (WT1 staining), cytoplasmic positivity (brown staining of the endothelial cell layer) also argues against a vascular malformation and in favor of a vascular tumor, thus consistent with an infantile hemangioma. 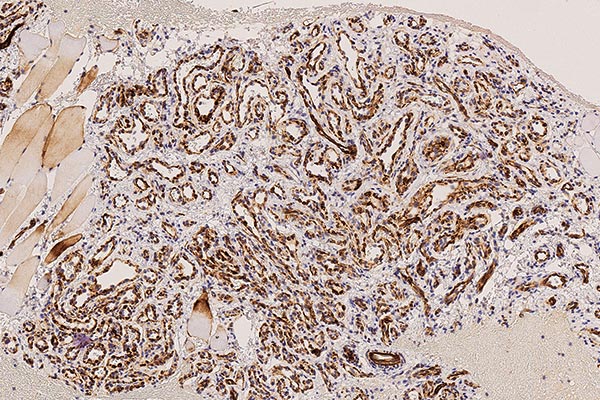 In the 250× detail magnification of GLUT1 staining, infantile hemangioma capillaries exhibit characteristic immunohistochemical GLUT1 expression (brown staining of the endothelial cell layer), which normally shows positivity only in placental capillaries and vascular tumors derived from them. Hence, the assumption that infantile hemangiomas are derived from vascular precursor cells of the placenta. In other hemangiomas (e.g., congenital hemangiomas such as NICH or RICH), GLUT1 is negative. This  is the most important differential diagnostic histological criterion for infantile hemangioma. The erythrocytes contained in the lumina also show GLUT1 positivity and thus serve as a positive internal control that the staining has worked well technically. 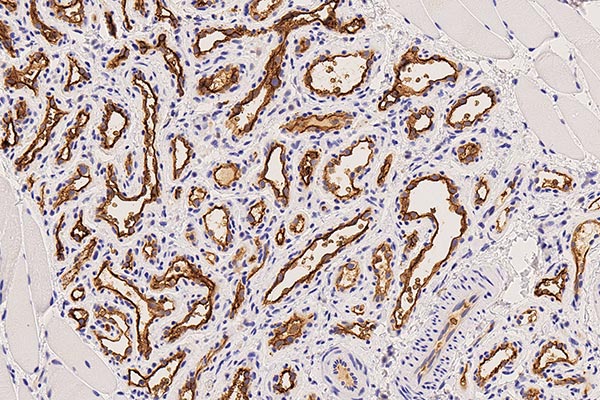 The clinical and imaging findings, in which a rebound phenomenon occurred in this case after discontinuation of propranolol and there was renewed proliferation in parts of the infantile hemangioma, are reflected in determination of the growth fraction of a cell population with the MIB-1 antibody that stains the Ki67 protein. This indicates proliferating cells (Ki67; 300× magnification). The Ki67-positive proliferation fraction in the endothelium is up to 10% (dark brown-stained nuclei are mitotic) as a manifestation of the rebound phenomenon. 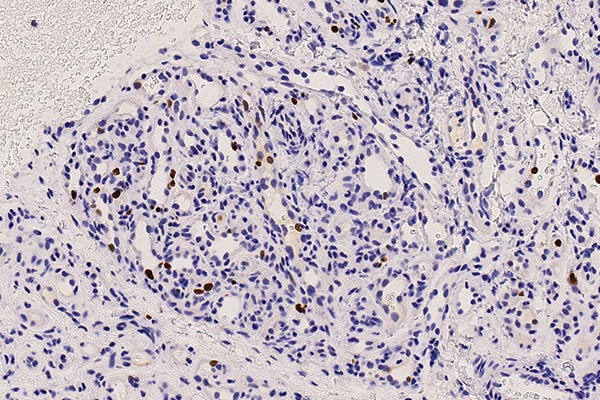 Infantile hemangioma is usually located on the skin and exhibits a typical appearance and growth behavior. Further imaging and histological confirmation are not usually necessary. However, subcutaneously located parts, especially if they are relatively large, may present a differential diagnostic difficulty; especially if their growth behavior differs from that of the cutaneously visible parts, as in this case. Re-enlargement of the subcutaneous lesion after discontinuation of propranolol ("rebound phenomenon") raised doubts about the tumor’s biological behavior. Thus, histopathological confirmation of the diagnosis of the subcutaneous lesion was performed using a small 16-gauge punch biopsy.

Histopathological workup then revealed the typical findings of a benign vascular tumor. The lesion was interspersed with many lobular capillary infiltrates, with symmetrical vessel wall/perimyocyte (SMA) layer. CD31 and WT1 positivity also suggested a vascular tumor. The definite differential diagnosis is then achieved with GLUT1 staining, which is endothelial positive in infantile hemangioma as the only vascular tumor, as in this case. As an expression of the renewed occurrence of some proliferative activity with re-enlargement of parts of the tumor, Ki67 staining is found in up to 10% of the endothelial cells.

Propranolol had to be discontinued prematurely due to comorbidity, but the diagnosis is now confirmed and the arm can be fully used without significant limitations. The further course of involution is awaited in this case with multiple clinical check-ups.