12-year-old female patient, left supraclavicular progressive swelling first visible 3 years ago; condition after 7 previous embolizations with NBCA glue, EVOH and pure ethanol. After one embolization with pure ethanol, development of necrosis, healing over 6 months. Despite this therapy, further rapid proliferation and local pain occured. Infrared thermography in the area of the pulsatile, palpable swelling shows marked hyperthermia (light-colored to white in the image) and a superficial, warm drainage vein.

In color duplex sonography (CDS), massive perfusion of virtually the entire lesion consisting of vessels is seen at an intermediate setting of pulse repetition frequency. This is typical of a fast-flow malformation. 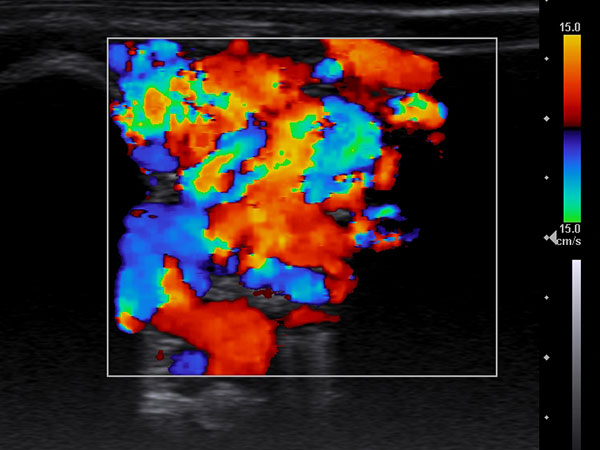 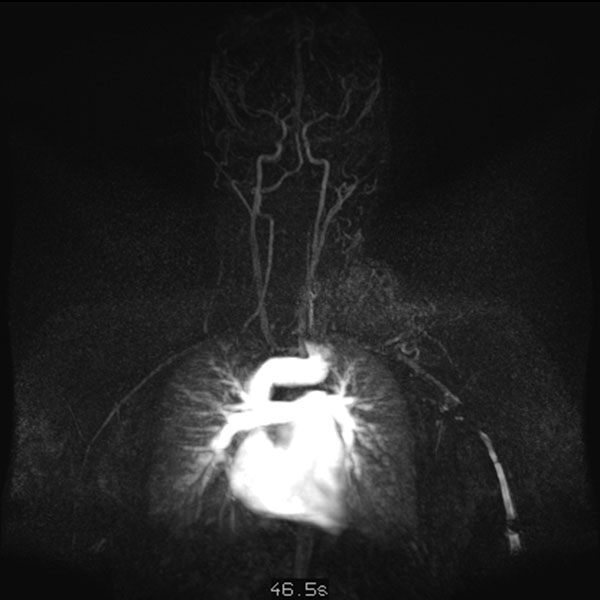 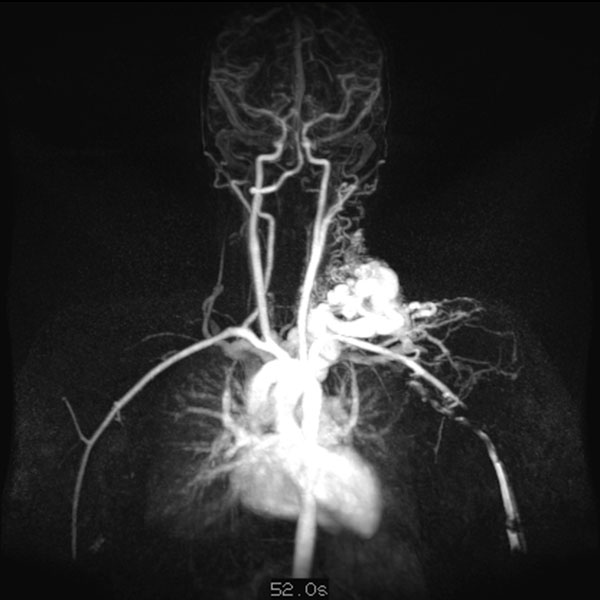 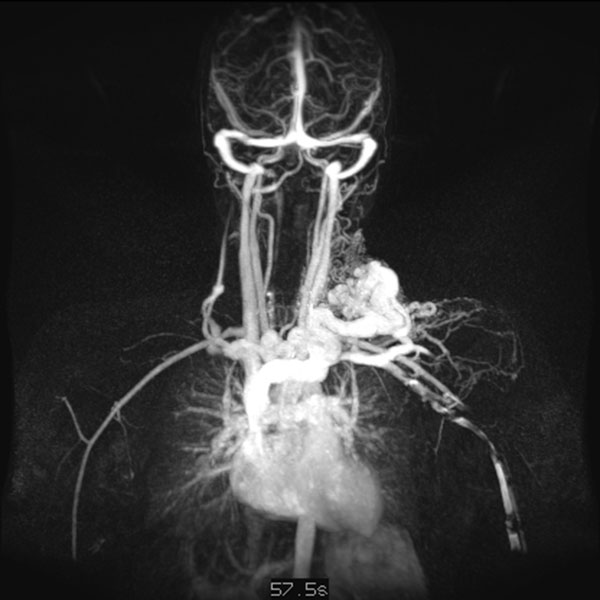 On non-enhanced, T1-weighted coronal MRI, the arteriovenous malformation appears as a severely hypointense (black) mass without a solid character. The lack of MRI signal is due to the fast and strong flow (so-called "flow voids"). The blood flows so fast through the lesion that it cannot generate an echo signal. 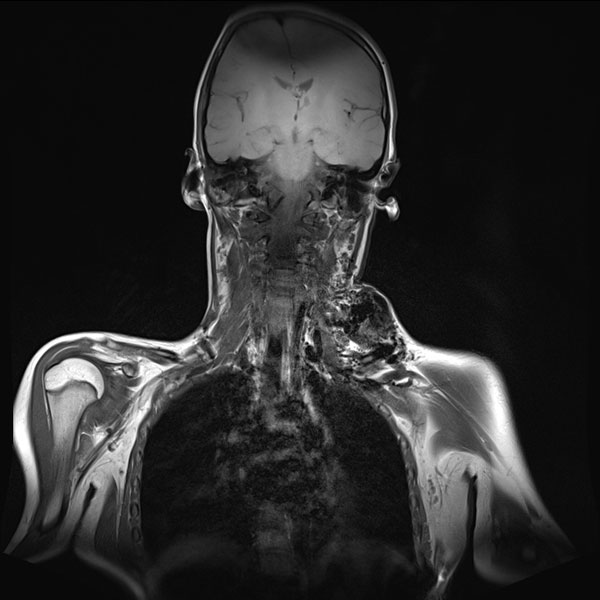 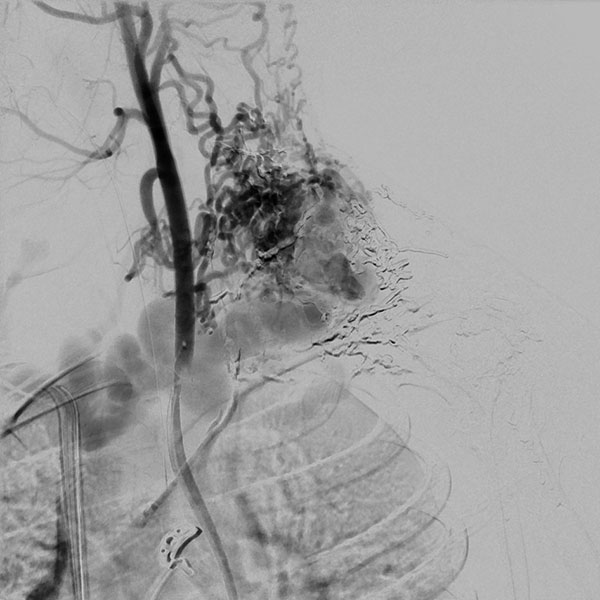 Digital subtraction angiography (DSA) after injection into the left subclavian artery. There are also innumerable arterial feeders, directly from the subclavian artery, but also multiple feeders directly from the left vertebral artery. On account of the multiple, fine arterial feeders that can hardly be identified individually, a purely transarterial embolization is technically not possible and also not expedient. 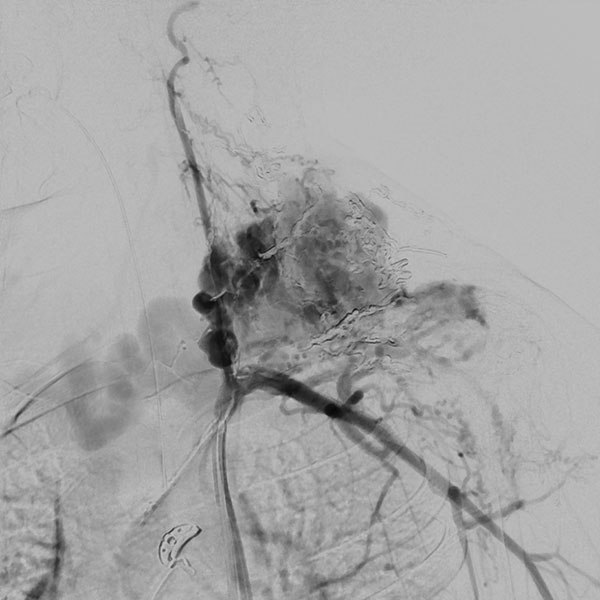 Digital subtraction angiography (DSA), non-enhanced image. The nidus of the arteriovenous malformation was now filled successively in 2 embolization sessions via direct puncture with the liquid embolic agent ethylene vinyl alcohol copolymer (EVOH), which flowed viscously like lava. The nidus was completely filled at the end after injection of 37 vials of the radiopaque embolic agent. There is no more flow, the arteriovenous malformation is closed. 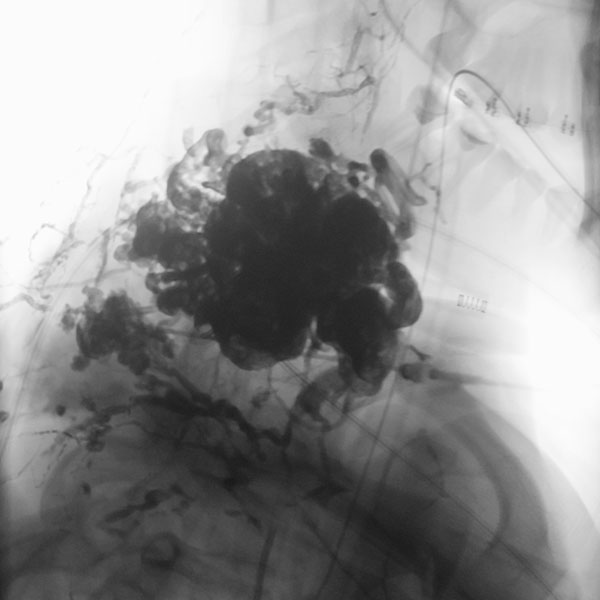 Digital subtraction angiography (DSA) with proximal injection into the left subclavian artery after completion of the 2nd embolization. In this late phase after injection, some arterial feeders are still present, but they no longer connect to the nidus of the arteriovenous malformation. Venous outflow is also no longer evident. Thus, the AVM is closed. 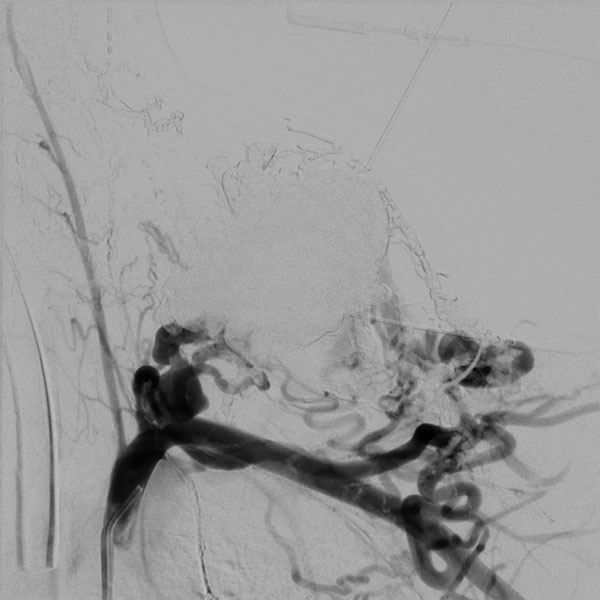 Infrared thermography immediately after the end of the 2nd embolization also impressively shows that, although the swelling due to the arteriovenous malformation is still present, the hyperthermia now no longer exists. Locally, the temperature was even slightly cooler immediately after embolization.

Dynamic, contrast-enhanced MR angiography 5 days after embolization; imaging in the late phase 107 s after intravenous contrast administration. Even after this long delay, there is no residual perfusion of the arteriovenous malformation. Only some non-occluded arterial inflows are still shown, but these no longer find any outflow or connection to the AVM. 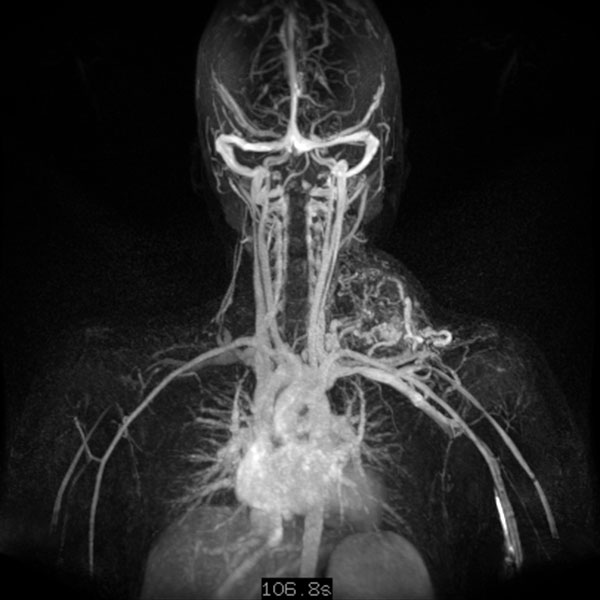 As a result of complete occlusion, the arteriovenous malformation is now operable in principle for the first time. In order to remove the local mass and also to ensure that there is no recurrence over the course of many years, the AVM is microsurgically dissected and finally resected completely without complications in one session. The cast of the vessels of the nidus, the black embolization agent, is clearly visible in the surgical preparation.

Dynamic, contrast-enhanced, temporally high-resolution MR angiography (left) 5 days after open resection of the occluded nidus; imaging again in the late phase 107 s after intravenous contrast administration. Even after this long delay, there is no residual perfusion of the arteriovenous malformation. The mass effect of the AVM, initially still visible in the coronal T1-weighted, non-enhanced MRI (right), has disappeared after resection. 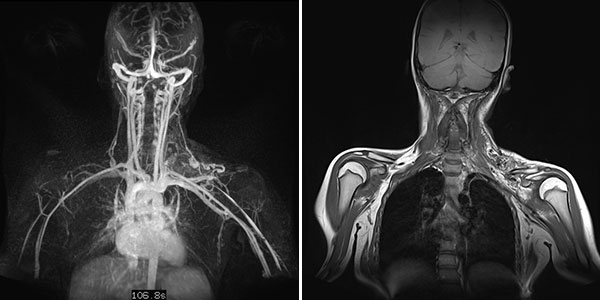 Histopathological section of the resection specimen; hematoxylin & eosin stain, 5x magnification (overview): Multiple, proliferated vessels of the AVM are found, predominantly arterial or arterialized with thick vessel walls. These are filled down to the capillary level with the black embolic agent (ethylene vinyl alcohol copolymer; EVOH). 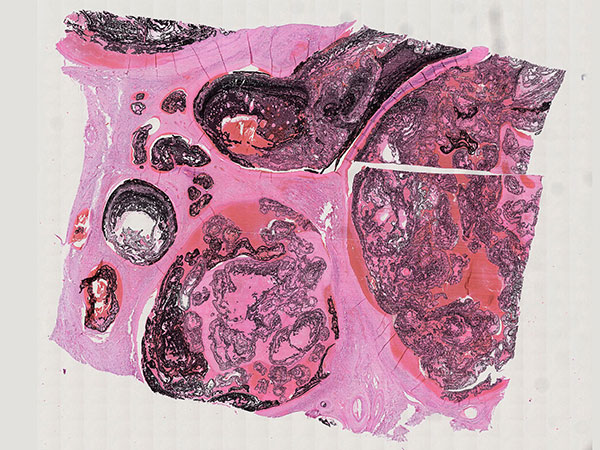 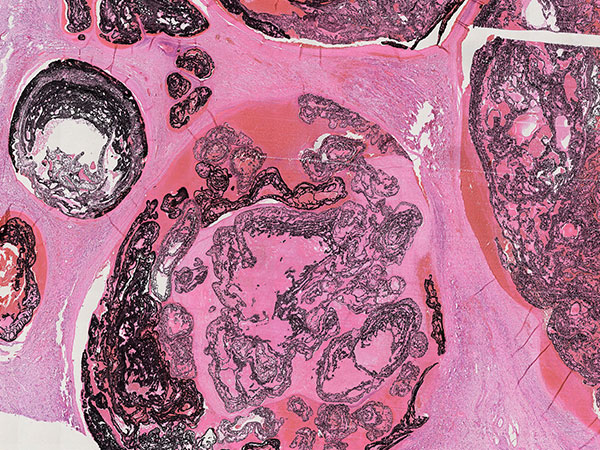 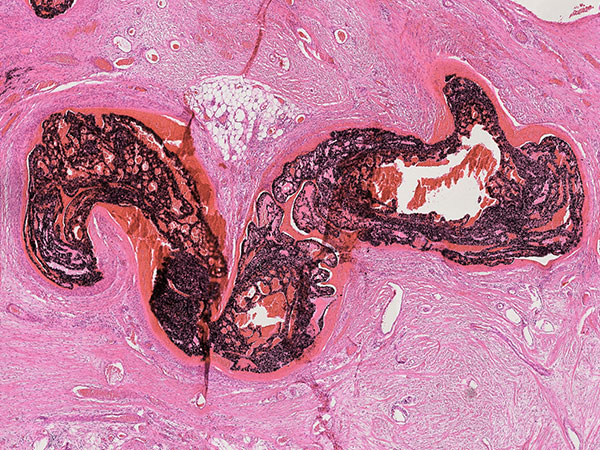 Histopathological section of the resection specimen; hematoxylin & eosin stain, 14× magnification: At the level of the nidus with its multiple, direct arteriovenous shunts, it is no longer possible to clearly distinguish between arterial, capillary, and venous vascular structures in the bizarre dysplastic vascular spaces. These spaces are also filled by the black embolic agent, which was injected into the nidus under pressure ("plug & push technique"). 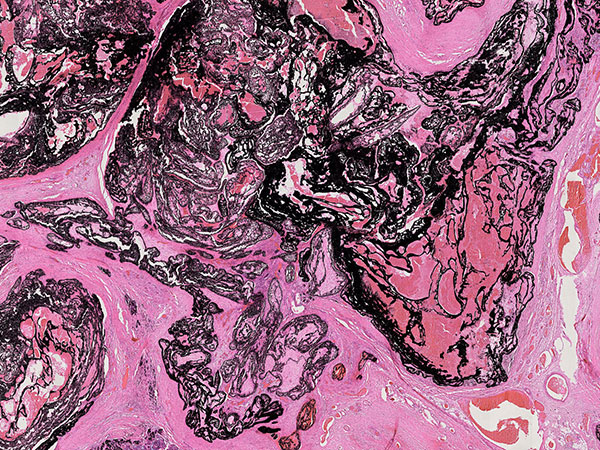 Arteriovenous malformations are particularly difficult to treat when recurrence has happened and the lesion has been previously operated on several times, then proliferates. In such a situation, complete combined embolization with complete occlusion should be attempted if possible, followed by total resection of the occluded nidus if technically at all possible.

It was possible to occlude the arteriovenous malformation with a high dose of embolization agent in 2 sessions. Subsequent resection surgery was then performed completely and without complications.

The histopathology of the specimen nicely shows the fine structure of the vascular architecture of an arteriovenous malformation. Unlike slow-flow malformations (venous or lymphatic malformations), the arteriovenous malformation as a fast-flow lesion is under high, constant flow and thus high pressure because of the immediate arteriovenous shunts. Thus, the venous outflow also arterializes rapidly. It is difficult to distinguish whether the many small, dysplastic vascular structures are arterioles or venules. All of them have a distinctly thick-walled, arterialized vessel wall. The embolic agent extending to the capillary level and occluding the nidus is also clearly shown in this case.

Overall, the patient is now unlikely to develop another recurrence. Nevertheless, this patient is still in a follow-up surveillance program.