Diagnostic and therapeutic considerations are complicated not only by the variability of venous malformations but in some cases by their combination with other malformations and anomalies as well. These special forms occur less frequently than sporadic venous malformation, can be partially genetically determined and are often named after the first person to describe them, an acronym or a mythical figure. Genetic investigations have made it possible to achieve an initial provisional classification of these special types.

Fibro-adipose vascular anomaly (FAVA) is a venous malformation with accompanying, circumscribed proliferation of soft tissue (fat and connective tissue) in which a somatic mutation of the PIK3CA gene, which regulates cell growth and metabolism, has been detected. The progressive growth of connective, fatty tissue and immature vascular structures (venous malformation) is irregular and crosses different tissue layers, thus affecting muscle mass and function. These changes are progressive and lead to a remodeling of the affected musculature with substantial hardening and contracture of the tissues. The calf muscles are often affected, which can result in disproportionately severe pain and contractures in the ankle joint.

Although there may be sensitivity to pressure and mechanical stress, more symptoms occur during movement. This is the case, for example, on the eyelid or between the toes. Since the affected area is relatively small, both resection and sclerotherapy are used in such cases, with glomuvenous malformations showing a relatively poor response to sclerotherapy.

In VMCM (familial cutaneous and mucosal venous malformation) there are multiple 1 to 10 mm sized, bluish and compressible, sponge-like venous malformations on the skin and mucous membranes. These slow-flow malformations are present at birth, increase in size and number and become larger with age. It is an autosomal dominant disorder, so that one parent is also affected. However, the phenotype in a family can vary considerably in size, number and distribution. In addition to the visible, small skin lesions, the disease is characterized by recurrent phlebitis. Local intravascular coagulation (LIC) can lead to life-threatening DIC due to external factors such as surgery and trauma. Accordingly, if D-dimers are increased, anticoagulation with low-molecular-weight heparin (LMWH) should be performed prior to any surgery. Sclerotherapy is an effective way to address the larger lesions and thus interrupt the coagulation cascade. Women with VMCM should avoid contraceptives with high estrogen content as they promote the enlargement of venous malformations. The glomuvenous malformation (GVM) and blue rubber bleb nevus (BRBN) syndrome must be differentiated. In GVMs, the D-dimers are normal and the lesions do not occur on the mucous membranes. In BRBN, the clinical picture is characterized by hemorrhages mainly in the intestine rather than phlebitis. 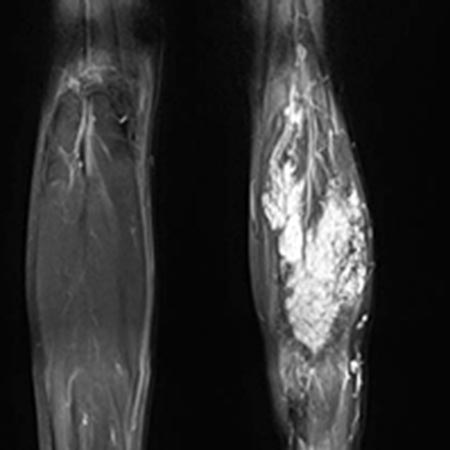 12-year-old girl with a fibro-adipose vascular anomaly (FAVA) in the calf muscles with pain and progressive pes equinus; surgical therapy