Surgical resection is an important component in the treatment of a cystic lymphatic malformation (hereafter “LM”). If an LM can be completely removed, resection will be chosen in many cases. This is true for limited lymphatic malformations in the skin and subcutaneous area or for retroperitoneal LM, which can sometimes be completely removed laparoscopically.

However, surgery can often only achieve partial removal without injuring important structures. It nevertheless has its place in the therapeutic process when the goal is to bring an LM to the “control” stage. In the facial region, sparing the branches of the facial nerve is important, so the procedure of intraoperative neuromonitoring is used here, as well as in the neck region, where the accessory nerve and the cervical and brachial plexus must remain uninjured.

Above all, macrocystic lymphatic malformations can be cured or improved by sclerotherapy. A wide variety of sclerosing drugs are used for this purpose. OK-432 (picibanil) is a Japanese product consisting of fragments of a Streptococcus pyogenes which, when applied to a cyst, triggers an inflammatory immune response to the foreign protein and causes the cyst to shrink. The antibiotic doxycycline and the cytotoxic drug bleomycin are also widely used. They are usually applied under intraoperative sonographic control. Alcohol-containing substances such as STS (sodium tetradecyl sulfate) or polidocanol are also commonly applied under sonographic and radiological control.

This is sometimes combined with the insertion of a pigtail catheter, which can relieve the tissue in the case of severe post-interventional secretion and provide an access for repeated sclerotherapy without re-puncture. This procedure is very beneficial when treating retropharyngeal cysts and securing the airway. Bleomycin (with or without reversible electroporation) is particularly suitable for microcystic areas, which are usually infiltrated under sonography. Cutaneous or mucosal vesicles can be effectively treated by sclerotherapy but are prone to recurrence.

A procedure that is likely to prove promising is bleomycin electrosclerotherapy (BEST) or reversible electroporation, in which an electric field is applied to the malformation, briefly increasing cell membrane permeability and allowing higher doses of bleomycin to enter the cells.

Laser therapy is used to ablate vesicles, for example, intraorally and on the skin. A CO2 laser is generally used, but it ablates the skin as a whole and can cause scarring. Recurrences are also frequent. For interstitial therapy with puncture of the tissue and introduction of a laser fiber, the neodymium:YAG laser is suitable. In this case, the tissue is usually thermally damaged under sonographic control.

Conservative therapy includes manual lymphatic drainage, compression therapy and, if necessary in individual cases, the medicinal use of mTOR inhibitors such as sirolimus. 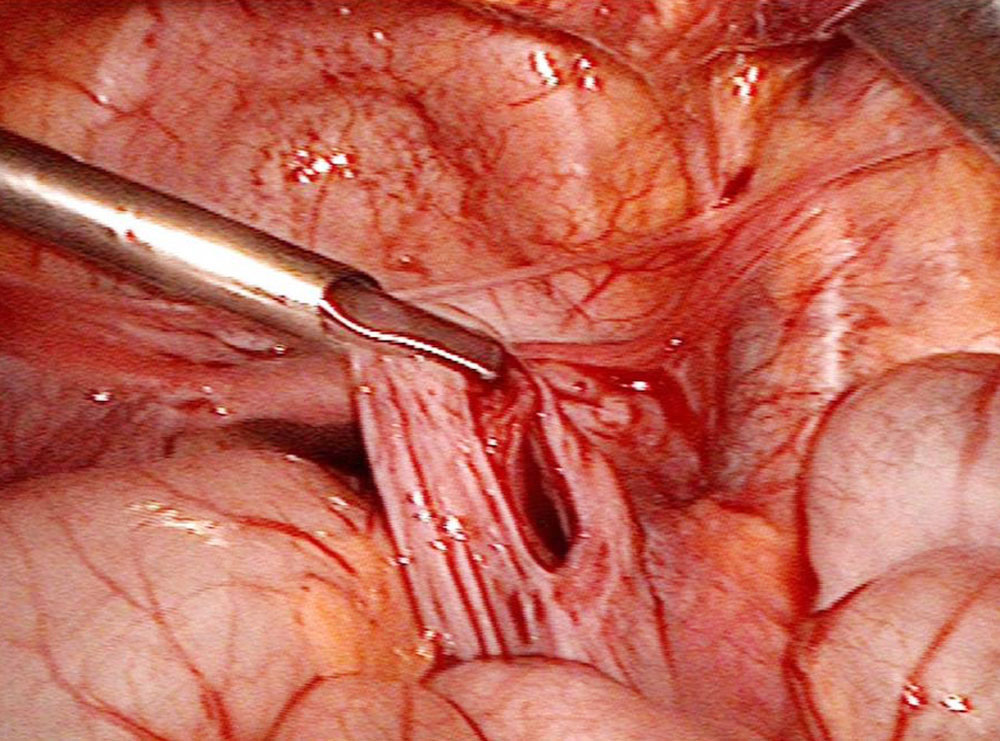 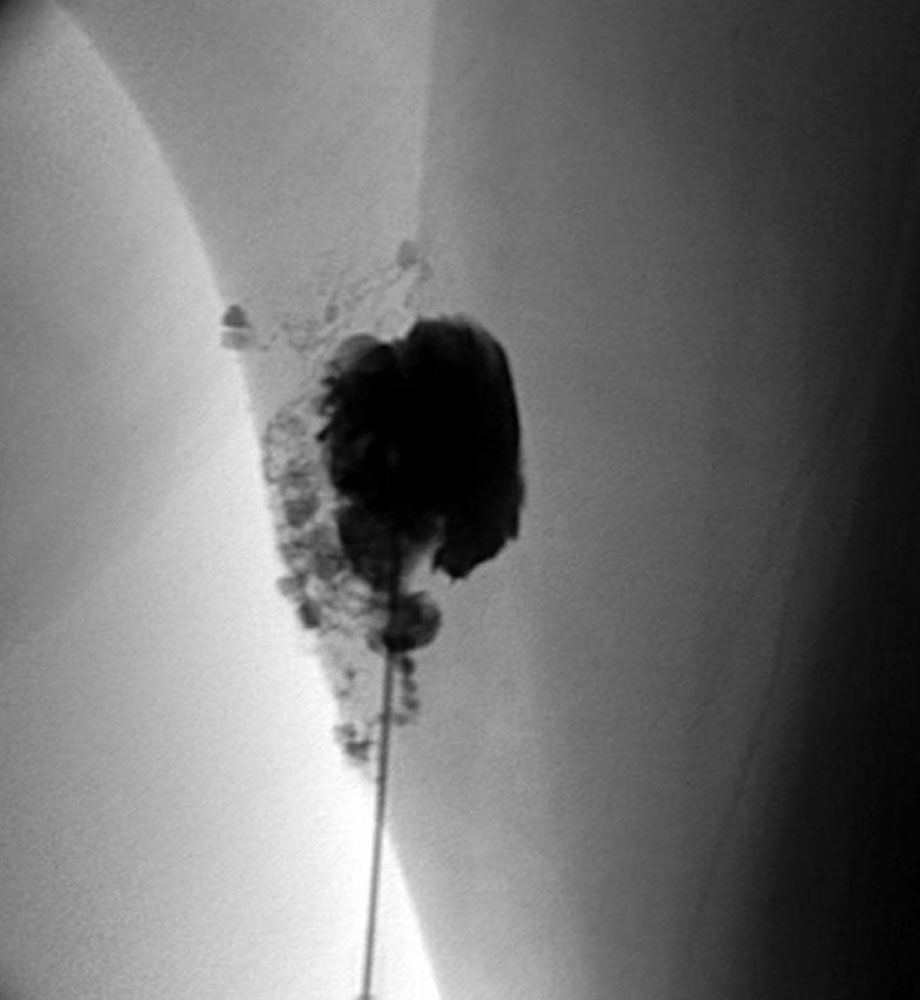 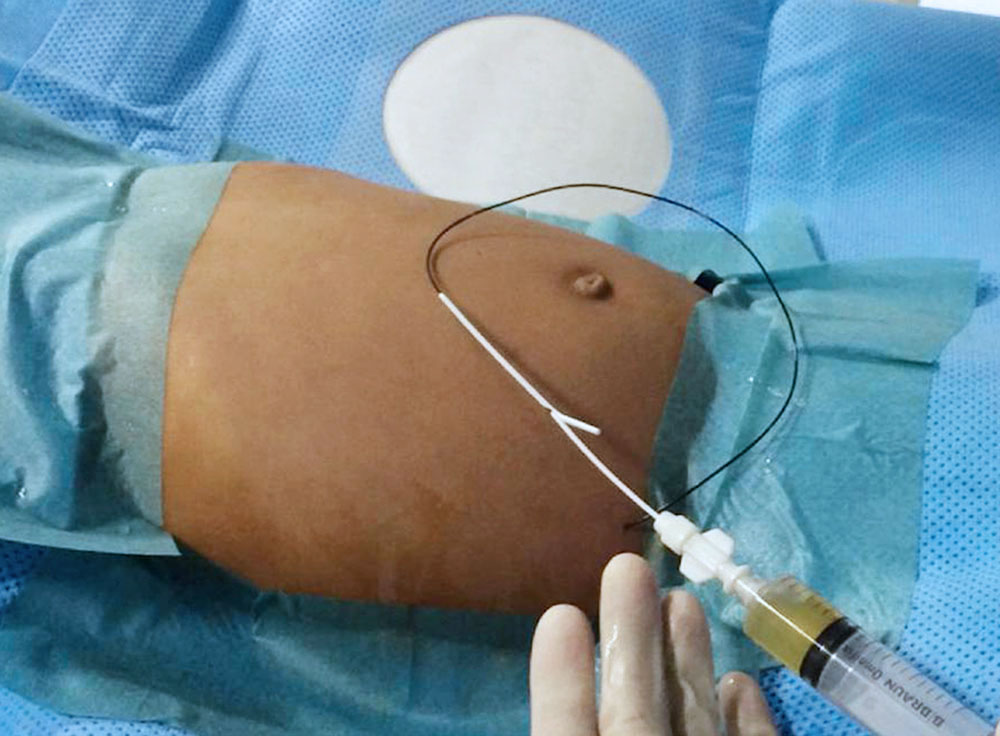 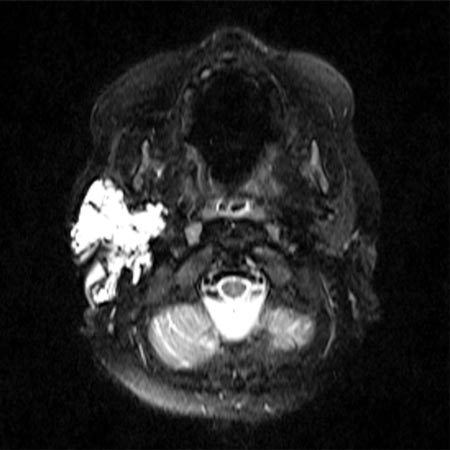 Lymphatic malformation of the parotid gland 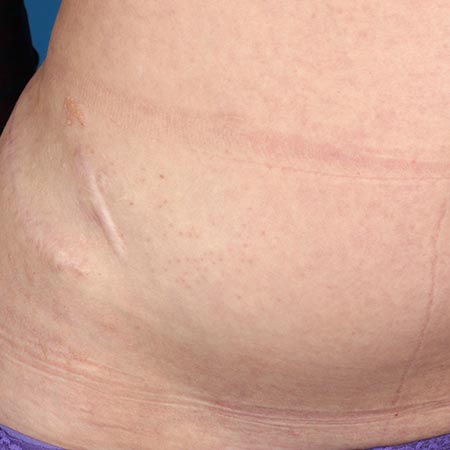 Lymphatic malformation of the abdominal wall with lymphorrhea

32-year-old female patient with circumscribed swelling on the abdominal wall (lymphatic malformation) with small lymphatic vesicles on the skin and lymphorrhea; sclerotherapy